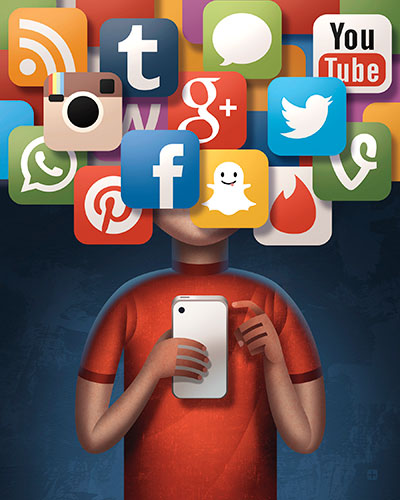 I get asked quite often about allowing teens on social media (Facebook, Instagram, twitter, Snapchat, etc).  For what it’s worth here is my advice and thoughts.

First, this is the world they are growing up in.  In our world (those over 40), the internet came along early enough for us to appreciate it, but when we were old enough to know better.  I can’t even imagine what would have been going on had it been there through the high school years.

I think it’s better to have “guided” social media than be allowed to get it later.  Now when I say guided, I don’t mean you have to friend/follow them or even check it everyday.  Just be aware of what is going on, talk to them about it, listen when they ask. Never say I don’t know how to use it, if you don’t my advice is figure it out together.  Teach them how to use passwords, basic internet safety, keep personal data secret and once you say or do something on the internet it’s forever on the internet….cause it is.  Even temporary posts in apps like Snapchat are setting on a server someplace, I guarantee it.

Second, if you are apprehensive about allowing your teen on social media, ask yourself why?  I find there are usually two dominating reasons.  One, my teen might see pornography.  Yes, he will.  But Google boobs and watch what you get and chances are he already has.  Social media is a connection to friends, family and people….not pornography.  Sure it is used for those purposes, but not allowing social media will not prevent the exposure. Two, he/she may get contacted by someone who want to harm them. Again, possible, but not as likely as the media makes it out to be.  Basic internet safety.  Don’t talk to strangers and keep personal data safe. If they are unsure if they know this person, ask for help.  Above these issues is the subject of cyber-bullying.  This is by far my biggest concern over porn or pervs. Why? Because it is usually done by friends or people your teen has contact with in the real world as well as cyberspace. Be mindful of their general mood or any changes in behavior. I also think overreacting and pulling them from social media will only make matters worse.  Talk with your teen and do everything you can to let them know they can discuss anything with you (parenting 101).

Pick 2.  There is no reason to allow your teen on more than two social sites.  Let them pick but before you do, let them know if there are any that immediately out of discussion (ie. Snapchat). Don’t try to force them to ones you use and understand.  It won’t work and will probably lead to “secret” accounts you know nothing about.  Learn the apps and services.  Learn what they can do, privacy rules, settings, and obstacles.  If you can’t, then ask for help yourself or get help from another parent that might use the service.  Load the app, create an account, and see if any of your friends use it.

Guided social media usage is just common sense parenting and a very good opportunity to teach your teens how to use the internet and be safe doing so. Even as parents we might learn a thing or two on better internet safety as well.